Most course platforms give you precious few ways to release your content. Either everything available right away (terrible plan), or to set entire modules to drip out each week, which is still a pretty terrible plan.

We give you 5 ways to release content, and in this article I'm going to run through them and tell you how, why and when to use each one. 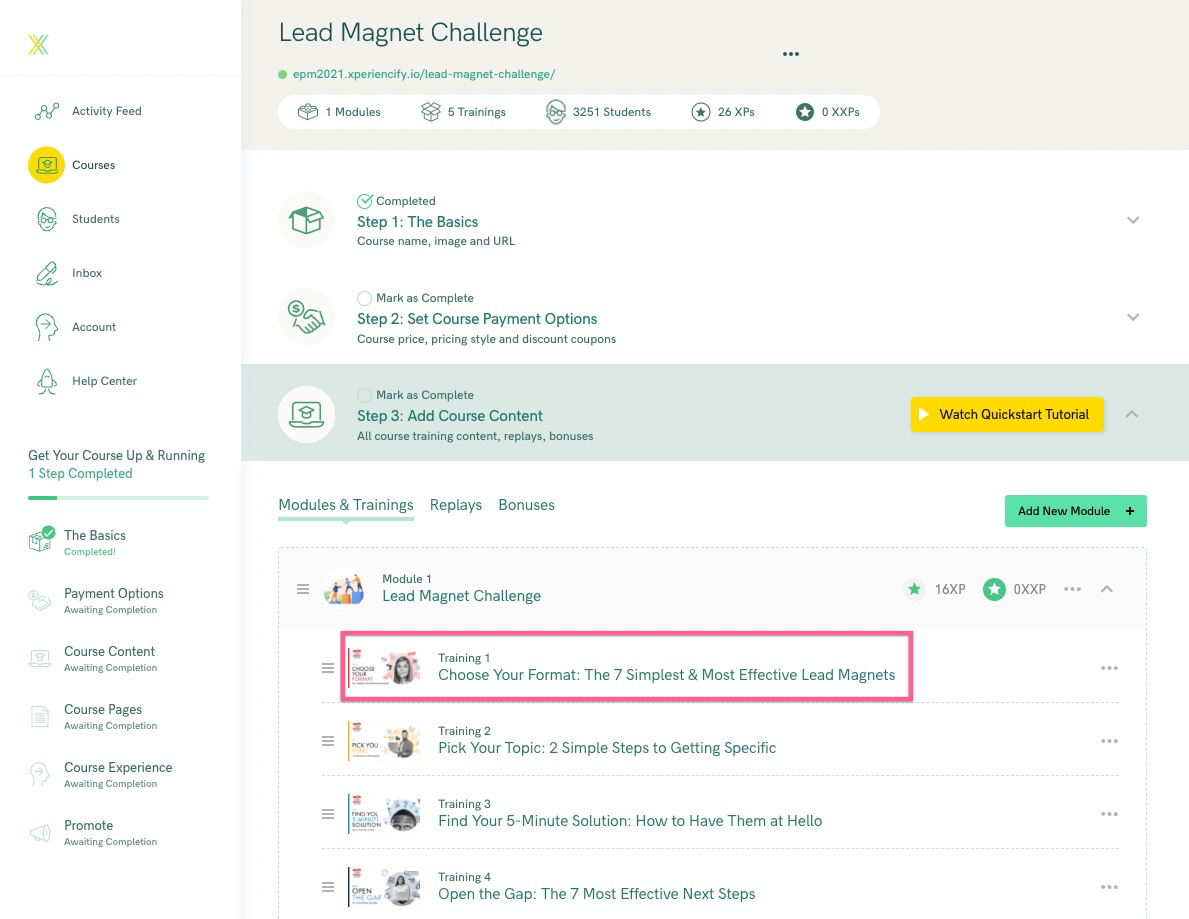 0. Draft - Not really a release method, but useful for if you want to add content to your account that's not quite ready to release. 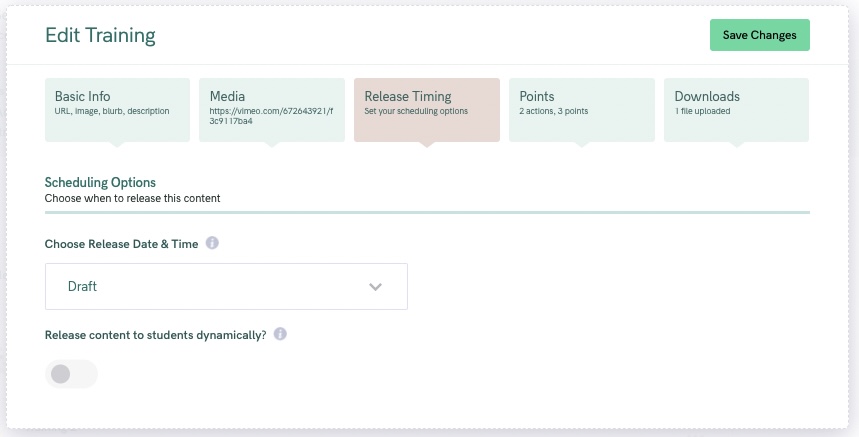 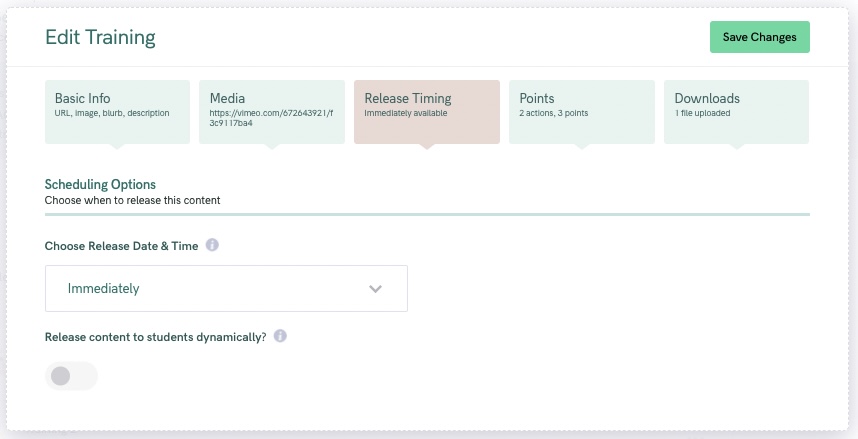 2. By Date - This allows you to set any Module or Training to release on a certain date and time in the future. This is useful when you're running a Course or Program live, and have a cohort of students joining at the same time, and you're uploading content and replays as you go. 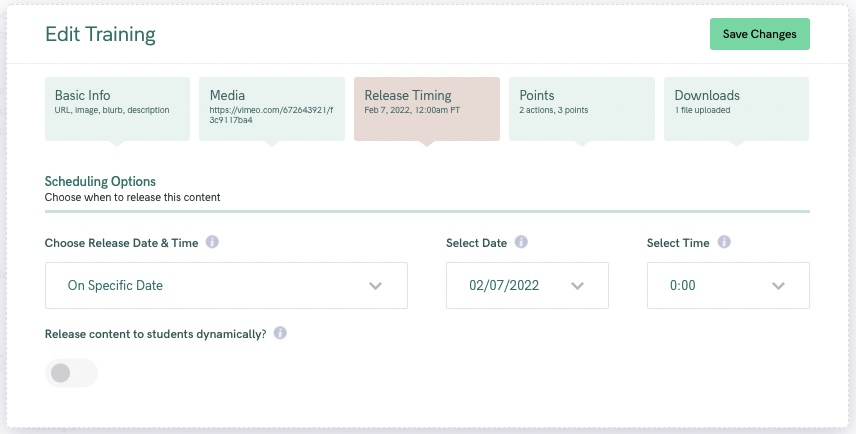 3. After X Days - the most common way to release content. You can set Module #1 to release immediately, and then set each subsequent Module to release after a set number of days. 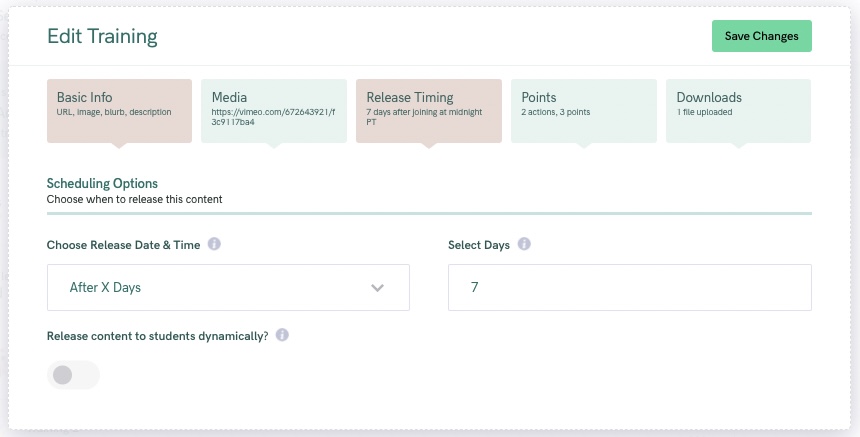 This is the most commonly selected option, but I want to encourage you to explore the other options we have for you. The more you can stoke engagement through creatively defying expectations about what membership sites are capable of, the more you'll benefit!.

For example, if you want the modules to release weekly, it'll look like this....

4. Nth Day, Specific Week - Great for releasing new content on specific days of the week, say every Monday while someone's in your program -- impossible to do if you only have access to standard "drip" scheduling. 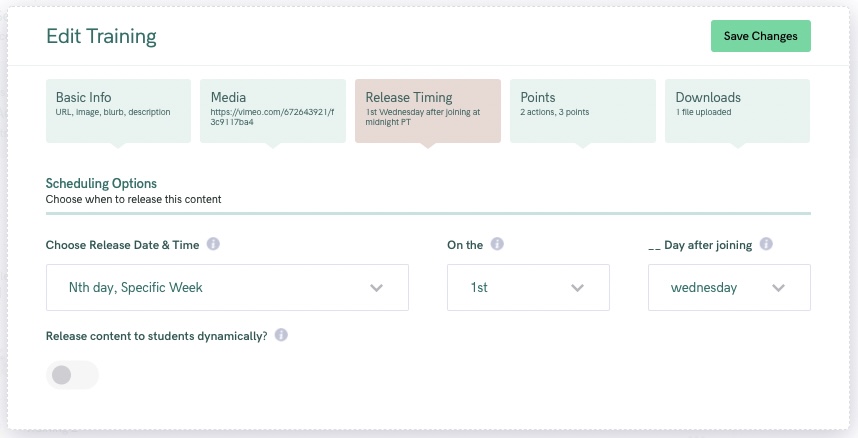 This option allows you to release a training on a specific weekday -- for example -- the 1st Monday or 1st Tuesday after the student joins.

Content will release at midnight PT on the day you specify. For example, if a student joins on a Sunday, and you have a training set to release "1st Monday" then the training will be released the very next day at 00:00 PT

NOTE: This option is meant to be used for releasing content on the same day every week (regardless of what day of the week a student joins your program).

As long as you release the content on the same day each week- you're good!

If you need to release content in shorter intervals than a week -- go with the "After X Days" option.

5. After X points earned (Available with Growth Plan or Higher) - Release a Module or piece of bonus content once a certain amount of XPs or XXPs have been earned. A great way to unexpectedly reward student efforts & accomplishment!

Or you can make them aware that their "treasure" will be unlocked after a certain amount of effort. Either way you do it, your students will be more engaged. Here's how to unlock a Module when a student earns a certain number of points.

6. Release Training After Previous Completed - We call this "Binge Mode" and it allows you to override any content release settings you may have and release training content when your student has completed the immediately prior training.

This has the advantage of allowing your super-engaged students to keep taking as much action as they wish, without waiting for the "official" content release date. 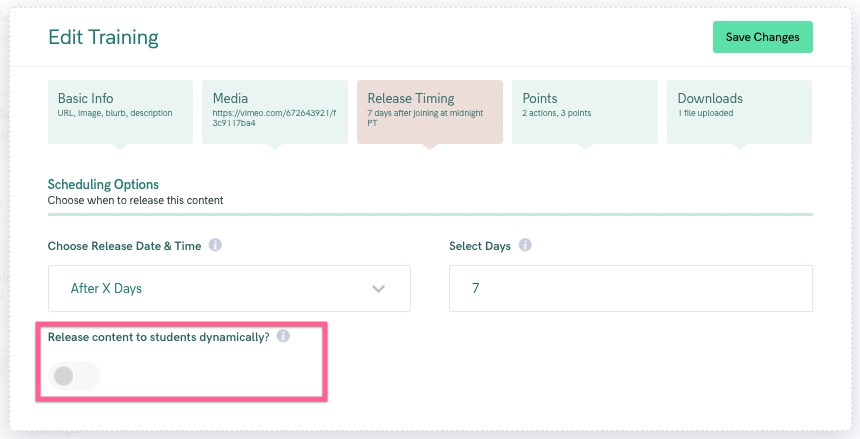 A Note on Timezones

Currently only PT (Pacific time) is supported when releasing time-based content. We intend to add all 24 timezones soon. For now, simply add on the appropriate number of hours depending on where you live.

How to manage your training content in Xperiencify to guarantee 10-30X more engagement, action and results for your students